Saint Lucia and the Republic of Kosovo signed an agreement that allowed holders of diplomatic and official passports, the ability to travel to and enter the territory of the other party without the need for a visa. H.E. Anton Edmunds, Ambassador of Saint Lucia to the United States of America and H.E. Vlora Çitaku, Ambassador of the Republic of Kosovo to the United States of America, signed this visa waiver agreement, while observing the necessary social distancing protocols associated with mitigating against the spread of COVID-19.

Saint Lucia established diplomatic relations with Kosovo on August 19, 2011, and this agreement on facilitating diplomatic and official travel is viewed by both parties as another step in the deepening of this relationship. The establishment of visa-free regimes with other nations is part of the Government of Saint Lucia’s effort to expand its diplomatic footprint. 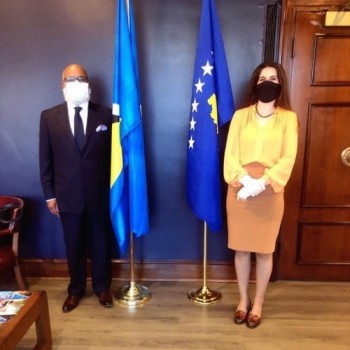